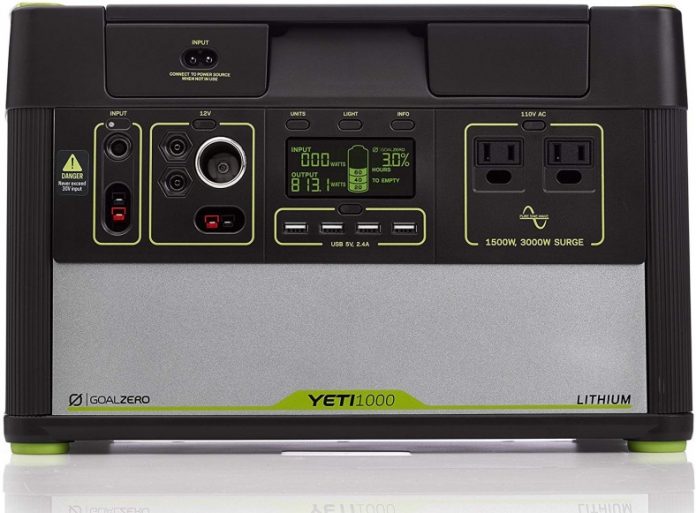 Both the Yeti 1000 and 1250 are designed with a variety of alternating recharging methods. Moreover, they provide a great source of recharge for a wide range of devices from personal electronics to even medical equipment and even kitchen appliances. However, there exist many differences between these devices, some minor others quite important. Take a look at some of the differences between these portable power stations.

The battery is one of the most important features on such devices. In this case, the Yeti 1000 is powered by a Lithium Ion battery while the Yeti 1250 relies on a lead acid cell chemistry to run. Because the Yeti 1000 is a li-ion style battery, it has a better power to weight ration not to mention the comparatively longer shelf life.

We have already mentioned there is a difference in how much either power stations weighs. The Weight heavily influences the portability of a power station. In fact, Goal Zero informs us that the Yeti 1000 is 30% easier to handle compared to the Lead acid counterparts.

Due to its outdated battery life, the lead acid style Yeti 1250 cannot outlast the Yeti 1000. The former lasts not more than a few months before requiring a recharge. Alternatively, the Yeti 1000 can last almost a year without recharging. On average, the Yeti 1000 requires that you charge it every 3-6 months, this is way longer than the minimum 2 months the Yeti 1250 requires.

It has to be said, unlike the Yeti 1250; the Yeti 1000 is not chainable. With the modular design on the Yeti 1250, you can efficiently extend runtimes when using this unit. You can chain the Yeti 1250 to other 12V batteries when you need more power. This isn’t the case with the Yeti 1000 that doesn’t allow chaining. Other differences such as the capacity are dismissible as the Yeti 1000 displays a higher power to weight ratio, making it an efficient power station at its size. 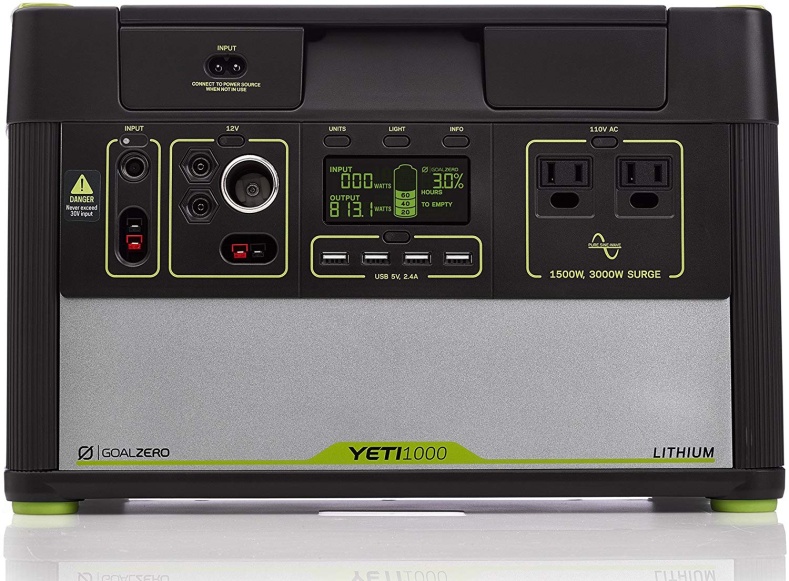 The Yeti 1000 by Goal Zero is a versatile and convenient lithium ion battery that is both powerful and silent. Goal Zero markets it as an innovative power station that allows you access to power with just one button. Here are some of the features that make the Yeti by Goal Zero 1000 so dependable.

General specifications on the Yeti 1000 are quite basic. It’s a well sized battery, weighing 40lbs and measures 10.1 x 15.3 x 9.3 in. These aren’t the best dimensions for a portable battery, but they aren’t exactly the worst. You are advised to operate this Yeti at temperatures between 32 to 014oF, or 0-40oC. This battery is encased in a strong plastic with reinforced corners with traditional handles at the top. One of the perks of this design is the compactness it results in.

The device features a variety of ports including 5 volt USB ports, 12V direct Current outputs not to mention the 110W AC outputs. A panel on the front with a dark display houses these ports. Luckily, it is quite easy to use. It might seem complex but using the easy read display with clear instructions. One of the important features on the Yeti by Goal Zero 1000 is the surge protection offered for the outputs.

One of the more obvious key features on the Yeti 1000 is the Lithium ion chemical nature of this battery. Not only does it have one of the most popular. In fact, the Yeti 1000 is a pretty large Li-ion battery: one of the larger ones on the Yeti series. Another pretty obvious feature is the instructions, and markings on the device. The markings on this battery are, made very clearly with high readability in respect to the markings and the display. This is important because it makes this device quite easy to use.

How to charge the Yeti by Goal Zero 1000

There are three different ways you can charge the Yeti 100 lithium. First off, using the compatible solar panel. Alternatively, you may use the included power supply to plug in to the wall and wait for 18 hours. Lastly, you the Yeti 1000 can be plugged into your car’s 12 V outlet for 9 to 18 hours.

Goal zero cautions against plugging in the Yeti 1000 on a 12V outlet with a different cable apart from their own charging cable. Doing so could cause damage to the device.

All these great features integrated on the Yeti 1000 are capable of powering the following: 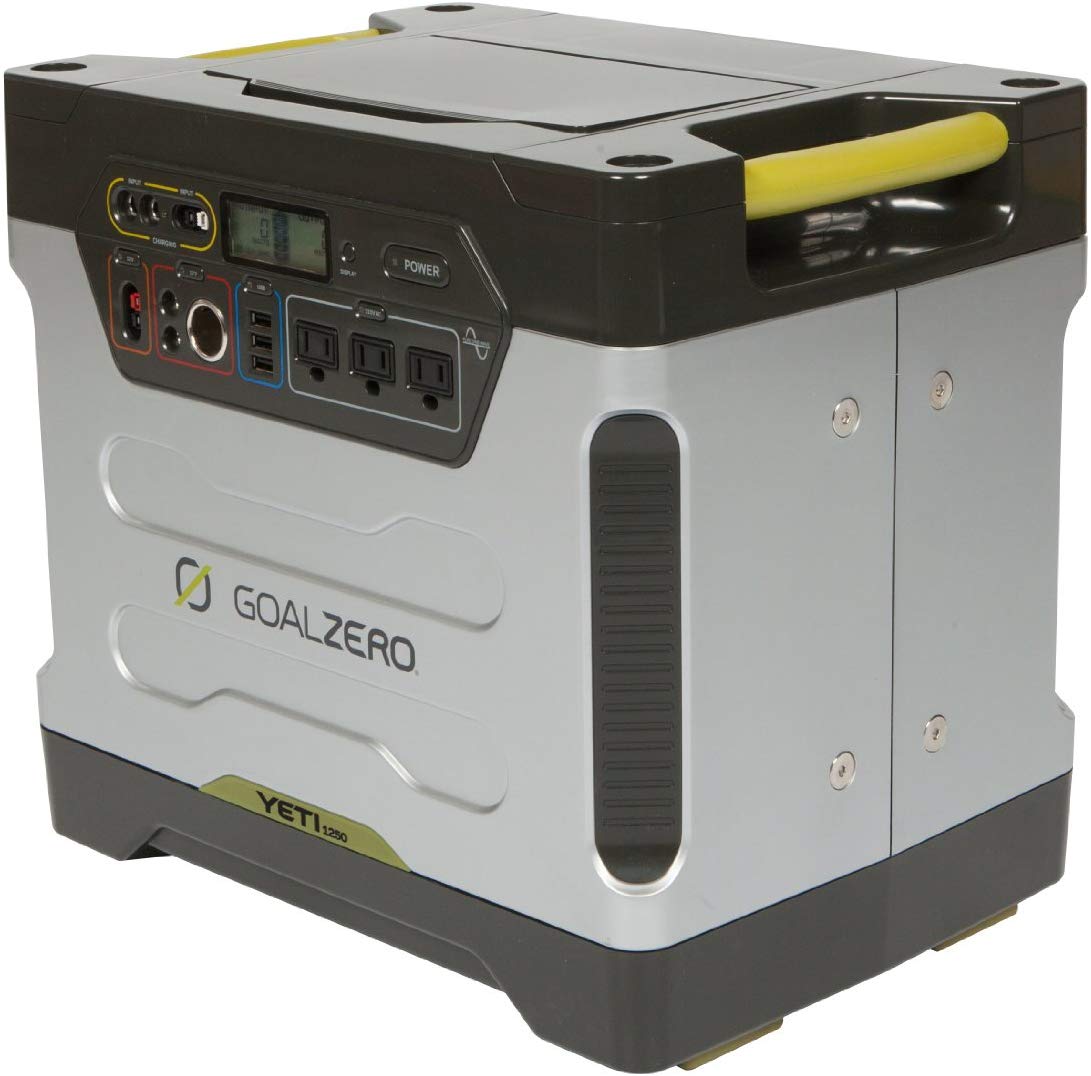 The Yeti by Goal Zero 1250 Portable Power station is a versatile power station that is great for both emergency and daily use. It is capable of charging a variety of devices efficiently without fail. This easy to chain, well equipped unit is a good portable charging power station thanks to the following features and capabilities.

Goal describes the Yeti 1250 as an all in one power station that has a 100Ah or 1200Wh capacity. It integrates a wave inverted like a portable inverted generator does. However, this installment doesn’t pollute the air or create noise during operation. Anyone can turn on the Yeti by Goal Zero 1250 quite simly with just a button.

Among the ports featured on the Yeti 125 include a 2.1A USB port, with 1200W AC port and 12V ports to power 10 devices at a time The elaborate display is not only enhanced, but also comes with an easy to read indicator. You can tell the battery level or even check the power input and output rates quickly and effortlessly.

This in combination with the inevitable 100lb weight, the Yeti 1250 is considerably heavy. Luckily, you can use the roll cart included with the Yeti by Goal Zero 1250 purchase in combination with the sturdy handles and wheels, the unit is quite easy to transport. If you need more power, you can chain the Yeti 1250 to other 12V, 100Ah batteries. With this, the unit may run extended runtimes. You have the modular design on the yeti 1250 to thank for this as it allows easy chaining capabilities.

The Lead Acid Battery powering the Yeti 1250 is easily rechargeable and can be replaced in the event a replacement is necessary. You can charge the goal Yeti three different ways, all of which vary n duration.

How to charge the Yeti by Goal Zero 1250

Like other Yeti portable power stations, you can charge this unit three different ways. First off, you may connect the compatible solar panel to the unit and wait the appropriate amount of time for the model to fully charge. This time will vary depending on the size and capabilities of the panel use.

Secondly, you may fully recharge the Goal yeti 1250 in 18 hours using the plug in. This is quite convenient for anyone looking for a full recharge. Lastly, though not the best option you may charge this unit is around 44hours using the 12V adapter in your car. However, this method requires that you purchase a compatible charger to use.

All these great features integrated on the Yeti 1250 are capable of powering the following:

Based on the features each portable station has to offer and the differences between them, we have to choose the Yeti 1000 as our winner. The Yeti by Goal Zero 1000 is simply more advanced than the Yeti 1250. As a result, it has a better power to weight ratio, lasts longer and is more convenient to use than the later. In fact, this unit is 30% easier to handle with a modern Li-ion cell chemistry unlike the 100lbs Lead-Acid counterpart.

The Yeti 1250 is capable of powering various devices including personal devices, some medical equipment or even kitchen appliances. To quote Goal Zero, the Yeti 1250 powers anything from phones, to even refrigerators: not to mention everything else in between.

How do you charge a zero Yeti goal?

There are 3 ways to charge a Yeti Power Station. These include solar means, AC or DC. First off: by the use of solar panels, different panels have different capabilities and thus different charge times. Alternatively, you may connect the unit to your vehicle using a 12v charger. Lastly, you may simply plug in the unit into the wall.

Can Yeti by Goal Zero power a refrigerator?