Portable generators are the in thing when you are looking for a dependable power source during camping trips or if you are operating a RV. The generators are easy to start and operate. They also come with good fuel economy and can run throughout the night. However, choosing the right generator is not a straightforward exercise as you have various brands to content with. In this review, we check out the Honda eb2800i and Predator 3500 and tell you which is better.

What are the differences between the Honda eb2800i and Predator 3500?

The Honda eb2800i is lighter than the predator weighing in at 67.7lbs. against 99.2lbs. However, it is much easier to move the predator because it comes with a set of transport wheels that lack in the Honda. The predator also comes with a double handle that makes it easier to carry. When it comes to connectivity the Honda eb2800i comes with more AC receptacles at four compared to 3 for the Predator. You also find a GFCI outlet in the Honda. The Honda benefits from a CO minder feature that helps it control the amount of carbon monoxide released by the generator. 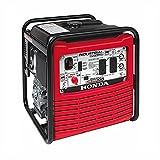 The Honda eb2800i is a 186cc 4-stroke portable generator ideal for camping and powering your appliances during various outdoor recreational activities. The 120V generator has a running watts output of 2500w and a starting watts of 3500w.

The Honda eb2800i has a fuel capacity of 2.1 gallons and can run for 11.9 hours on a full tank. The generator is fuel efficient consuming 0.18GPH. To start the generator you do it via a traditional pull-start mechanism. The generator has moderate noise levels of 62dBA which can be noisy for some people.

For supporting your appliances the Honda eb2800i has slightly more AC outlets than conventional generators coming in with four AC outlets. The Honda is a lightweight generator weighing in at 67.7lbs. and this makes it easier to move around.

To monitor operation for the generator you will find several indicator lights at the back. This show you when the generator is ready for use, overloaded or when you are experiencing low oil levels. To protect your generator it comes with overload protection and automatic low oil shut off. In addition, the Honda is one of those generators that come with CO minder technology. With the feature the generator will constantly monitor the CO levels and if its more than 800ppm then it will automatically shut off the engine. During this time the CO alarm indicator will flash five times and at this point it is impossible to restart the engine.

The generator is noisier

The predator 3500 is a 212cc inverter generator that produces a running wattage output of 3000w and a starting wattage of 3500w. The generator is parallel capable hence you can connect it to a comparable unit for more power output.

The predator 3500 features an electric starter that makes it easy to start the generator. It also features a manual pull and start mechanism. The predator has a run time of 11 hours at full tank of 2.6 gallons. It has decent fuel consumption of 0.24GPH. With its low clean sine wave of <5% THD the predator is a generator you can use with your sensitive electronics. For powering your appliances the predator 3500 comes with three AC outlets. You also have one DC outlet.

The predator 3500 is one of the most portable generators in the market. It weighs 99.2lbs. and comes with transport wheels which you can use to move it around. You also get double handles that make it easier to handle. Operation of the Predator 3500 is via its control center that consists of a digital center and indicator lights. The digital center allows you to portray information on power output, voltage and run time hours. The indicator lights shows you when the generator is ready for use, overloaded, or when the oil levels is low. You also get a built-in fuel gauge that shows you when you are running low on fuel.

To protect your generator from harm you have an overload protection and automatic low oil shut off. During purchase of the predator 3500 you will get a tool kit, RV adapter, funnel and battery charging cables. The predator is CARB compliant and EPA approved this makes it available in all the 50 states. The predator also features a spark arrestor which makes it safe for use in forested areas.

For this round our winner is the Predator 3500. We loved the fact that it has higher running and starting wattage which makes it suitable for operating multiple appliances. The generator comes with wheels and double handles and this makes it ideal for moving around. The predator electric starter is a big plus as it allows you to easily start it instead of the manual pull and start mechanism. You can monitor all that is going on with your generator via the digital data center.

Can I use the predator 3500 as a backup generator for my house?

If you live in a mid-sized house then the predator 3500 comes in handy to power most of your household appliances. The generator has running output of 3000 watts and can run for almost 11 hours on full tank. It is fuel efficient hence making it ideal for households and campers

What is the CO minder technology in the Honda eb2800i?

This technology uses sensors in the generator that cause it to automatically shut down should it sense that the CO levels are over the limit. This is handy technology to reduce CO emissions.